Skip to Content
0 shares
We recently had the opportunity to review a BabyMoon pillow!  We were sent a baby blue BabyMoon that looks like this: 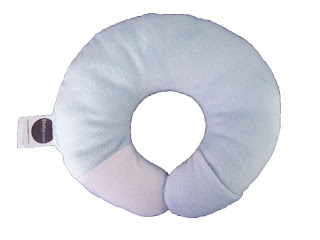 The BabyMoon pillow is different than other neck pillows because it can easily be converted to a pillow for head support while Baby is lying down or in a swing or bouncer.  There is a handy piece of velcro that can be hidden or exposed to attach to the other side, to create a pillow rather than just a neck support:

﻿The creator of BabyMoon, Kelly Su, invented the special pillow when her daughter was 3 months old because her head was becoming flat on the back.  Within a few months of using the pillow, her head flatness greatly improved!  Kelly does note that babies should not sleep on the pillow, but use it during awake, supervised playtimes.
Here are some action shots with our BabyMoon pillow! 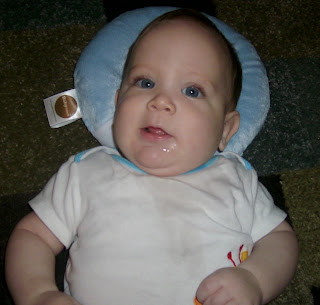 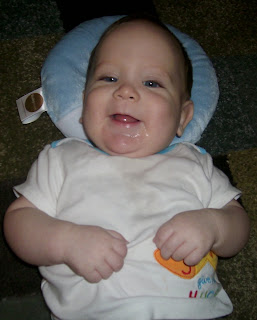 Baby D really is much  more comfy playing on the floor WITH his BabyMoon pillow.  It sure beats carpet poking the back of his head!
We also tried it out in the car as a neck support and while he is old enough to hold up his head, he liked it!  And there's no more droopy baby head while he's sleeping in his carseat!
Do you want to win a BabyMoon pillow for your little one?  Right now, BabyMoon is having a giveaway!
Check out BabyMoon on the web:
http://blog.shopbabymoon.com/category/blog/
Facebook : http://www.facebook.com/babymoonpillow
disclosure:  We were sent one BabyMoon pillow to review.  The opinions in this blog post are all mine!
Click here to cancel reply.

Prevent Flathead with a Babymoon Pillow

[…] years ago, when D was Baby D, we were sent a Babymoon pillow to try with him.  He was already five months old, but it was still very useful.  We would […]

I am visiting from the hop! I am your newest follower and would love it if you would follow me back! thanks so much!-Nikkihttp://chef-n-training.blogspot.com/

What a neat idea. Hop by my blog too,http://morethanjustamomma.blogspot.com/